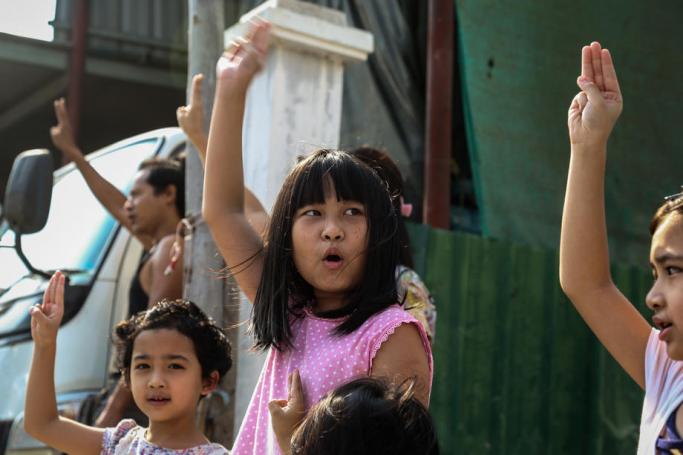 Campaign group Progressive Voice is calling for immediate, decisive actions from the international community, in particular the UN and the United Nations Children’s Fund (UNICEF), to get the Myanmar military to cease ongoing atrocities against children and to ensure that aid is properly delivered.

Progressive Voice says that the intensification of attacks by the Myanmar military on civilians, particularly in southern Shan State, Sagaing and Magwe Regions, are destroying this generation of Myanmar children. Continued silence and inaction by the international community only serve to embolden the Myanmar military to continue indiscriminate attacks, arson, detention, torture, and killing of innocent children. Immediate, decisive actions from the international community, in particular the UN and the United Nations Children’s Fund (UNICEF), to cease ongoing atrocities and ensure aid delivery are urgently needed to reunite families and save future generations of Myanmar.

According to a recent conference paper by the UN Special Rapporteur on the situation of human rights in Myanmar, at least 142 children have been killed by the military junta since 1 February 2021, whereas the Media Monitor Collective has documented as high as 239 cases since the attempted coup. The real number is, however, likely to tally much higher. Over 250,000 children have been displaced due to the junta’s relentless attacks, while more than 1,400 have been arbitrarily detained.

The Special Rapporteur’s report titled “Losing a generation” outlined a number of horrific stories of junta troops torturing children: soldiers “[beat], cut and stabbed children, burned them with cigarettes, forced them to hold stress positions, subjected them to mock executions, deprived them of food and water,” and tortured them by pulling their fingernails and teeth.

Shockingly, merely days after such an alarming report, UNICEF representative to Myanmar Marcoluigi Corsi was pictured presenting his credentials to the junta’s Foreign Minister Wunna Maung Lwin. Progressive Voice claims that engaging with an illegitimate body that is murdering innocent children and allowing the moment to be utilized as propaganda, UNICEF — whose motto is to work “for every child” — has lent legitimacy to the military junta who are the perpetrators of violence inflicted on children. This emboldens the military junta to further threaten the safety of Myanmar’s children.

These cruel acts against children have occurred throughout the Myanmar military’s decades-long terror on ethnic communities, particularly in Chin, Kachin, Karen, Karenni, Rakhine and Shan States.

Since the failed coup, children as young as one have been increasingly detained and tortured, killed in the arms of their families, shot while playing on the street, burned to ashes and desecrated to obfuscate the crime in the Myanmar military’s pursuit of terrorizing the whole nation. The junta has resorted to its tactic of taking children hostage to pressure family members and local communities to identify Ethnic Revolutionary Organizations (EROs) and People’s Defense Force (PDF) fighters.

Over 80 children were held hostage by junta soldiers for 36 hours at a monastery in Sagaing Region’s Yinmabin Township, using them as human shields against potential PDF attacks. The junta troops further massacred unarmed civilians in cold blood, as seen with the three children who were among 42 civilians killed and charred in the Christmas Eve Massacre in Karenni State’s Hpruso Township, and the five children who were killed execution-style among 11 civilians in Sagaing Region’s Don Taw village. Girls have been subjected to the junta’s sexual abuses and assaults when its troops pass through or set up camps in villages. On 4 April, a 14-year-old girl was abducted, raped and possibly burned alive by junta soldiers in Magwe Region’s Gangaw Township.

The relentless brutal crimes continue to date. On 8 June, junta forces reportedly abducted two ninth-grade teenagers from an IDP camp, subjected them to carrying heavy supplies, and later knifed them to death in Sagaing Region’s Mawlaik Township. On the same day, another two children were taken handcuffed from another IDP camp in the same township, forced to carry military supplies, and subsequently stabbed to death. The indiscriminate crimes against and mass executions of children underline the Myanmar military’s deliberate operations to inflict devastating impacts and suffering on innocent civilians in its terror campaign to quash the voices of the people of Myanmar, as they firmly and tirelessly continue to defend their democracy, life and liberty. These acts clearly constitute war crimes and crimes against humanity, yet the Myanmar military has continued to enjoy blanket impunity after perpetrating hundreds, if not thousands, of these crimes.

Against this backdrop the military junta is weaponizing the limited humanitarian aid to fuel its war at the negligence of the international community. The UN Office for the Coordination of Humanitarian Affairs (OCHA) and the ASEAN Coordinating Centre for Humanitarian Assistance on disaster management (AHA Centre) are working closely with the Task Force under the junta — the root cause of the humanitarian crisis — to facilitate aid delivery. The exclusion of the legitimate National Unity Government, EROs, local humanitarian and civil society organizations who have been delivering aid to vulnerable communities, is yet another example of how the UN and ASEAN are failing the people of Myanmar and acting in blatant violation of the ‘do no harm’ and impartiality principles.

Progressive Voice believes that it is past time the international community took concrete actions to halt the ongoing atrocities in Myanmar and end the immense suffering of children. Myanmar’s children and youth deserve to live a full, safe and dignified childhood, instead they are subjected to the junta’s terror campaign. All stakeholders – particularly UNICEF, OCHA and AHA Centre – must facilitate cross-border humanitarian assistance with the focus on children and families. Before another child is lost, a global arms embargo and tougher targeted sanctions on military-related businesses must be instituted. The UN Committee on the Rights of the Child must investigate and document all crimes committed against Myanmar’s children and make concrete recommendations to address justice and accountability, including reparations for victims and survivors. Without these mechanisms and measures put in place as a matter of urgency, the military junta is emboldened to continue waging war on the children of Myanmar.